Please note:
This is still ongoing and is being updated regularly, so the post has been stickied, recent articles added to the blog will appear below this one.

If you’ve been here before, you’ll recognise that map; and I can say I felt ready to work on this again – re purposing my methodology of selecting building assets to fit the times.

The Dove and Rainbow is a rock bar in the city centre, hidden away behind Bankers Draft and accessible either via the alley next to Argos.
It has a friendly atmosphere and great drinks (no, I’m not affiliated!)

In the video, I start from the appropriate mesh on the Sheffield map in Blender, and press / on the numerical keypad to isolate that object, and the reference image: this is so my view isn’t obstructed by other buildings in the scene.

The Dove and Rainbow, Sheffield. by davethefan on Sketchfab

I made one post about this on a community that I thought would share the appreciation, the r/Sheffield subreddit.
I’m not going to link them directly, if you are familiar with Reddit, I trust your ability to find the subreddit if you so wish to become a part of the community.

The original thread is here – please note, I’m only linking it here for transparency of the story that transpired through posting this.
You can see from the thread that u/Evilsquits (yes, I know – I thought I was the only Theme Hospital player who had adapted this term, too) had expressed an interest in running the model through slicer software (3D printing).
The user (I’m in no position to assume gender, and calling them evilsquits throughout feels very r/rimjob_steve because by god, for a user with such a horrific username, the help the help they provided for an entire evening was beyond wholesome, and it was such an honour.

I will not show you the private conversation I had with youknowwho because that’s private between us, but I will show the screenshots of emails I’d sent to them updating the .obj files.

The original version I sent had non-manifold mesh.
Non-manifold is data that is to be printed, but not actually connected to anything – so the printer will not print it.
I re-inspected the model, and found that the 3D text for the building frontage was not actually connected to the …veranda? is that the word?
Anyway, I brought that block forward so it intersected with the text and made one actual object.
3D Print Toolbox reported that it was non-manifold, so lets try it…

‘the texturing is all UV’ – so in laymans terms, UV is like origami, say you want to fold a Swan, you download and print a picture of a Swan, and by the folds and the creases – it looks right, but it’s still 2D: the texture is still on paper so has no real-world depth.
I took the window frames and extruded them very slightly, so that they had actual geometry.

We’d gotten talking about Old Queens Head, u/evilsquits had recognised me from an earlier post, the Sheffield game we’ve been talking about on here a lot. I already had Old Queens Head ready because I fricking love that pub!
Anyway, we discovered that the model worked great, until I went to make the mesh non-manifold, so that it could be 3D printed

Which got us thinking, this could be a happy accident – what if we could make it so the roof clips off, and you have an actual floor plan of the pub below.
That idea was interesting and exciting to us, so we deciced to look at ways where the mini-sculpture would be functional as well

Below was the detatchable roof, we had another idea which we thought would be reet cool, but aren’t going to say until we master it.

My last email was this, though I have heard from the redditor that so generously gave their time (and they gave an entire evening!) and filament to try and print a 3D model another redditor had sent them.
(this is why Reddit is the only social media I partake in)

I am not a Facebook user; I have conditioned myself to treat social media like a drug, and as much as I would love to use social media to garner traction, I can’t bring myself to come back to using it again.
This is where Sayanti comes in, Sayanti (Moumita) aspires to be famous, and managing my social media PR is absolutely ideal for me.

I don’t check Facebook, so the only way I’d know if it was posted on Facebook would be by looking at my Analytics data.
As you can see from the screenshot below, 3.6 hours of this video have been watched in total: that’s longer than it took to make (just!) so any viewing activity from here on in is a win:win.

Far be it from me to humblebrag, but you can see from the analytics screenshot the approximate time it was posted to the r/Sheffield subreddit.

Previously, a large portion of our fanbase were Bengali speakers, but due to the double tragedy they have had with Supercyclone Amphan, amidst a Coronavirus pandemic, we still want to show solidarity, but appreciate that watching videos on YouTube is not their priority right now.

I approached u/evilsquits and asked for consent, so if you are reposting this as your own clickbait content, we’d appreciate the nod too.

And yes, u/evilsquits, you really did do something.
You inspired hope within me, and your viewing activity and karma formed part of a sharp curve that confirmed that I was on the pulse of what people want – and yes, Old Queens Head is next (again)

I’ve not seen a photo yet, but as soon as I do – you know it’ll be posted here.
u/evilsquits – if you’re reading this, we’d love to see the 3D printed version next to a 5 pence piece for scale.

I now have the photos and I’m so pleased to share them with you: 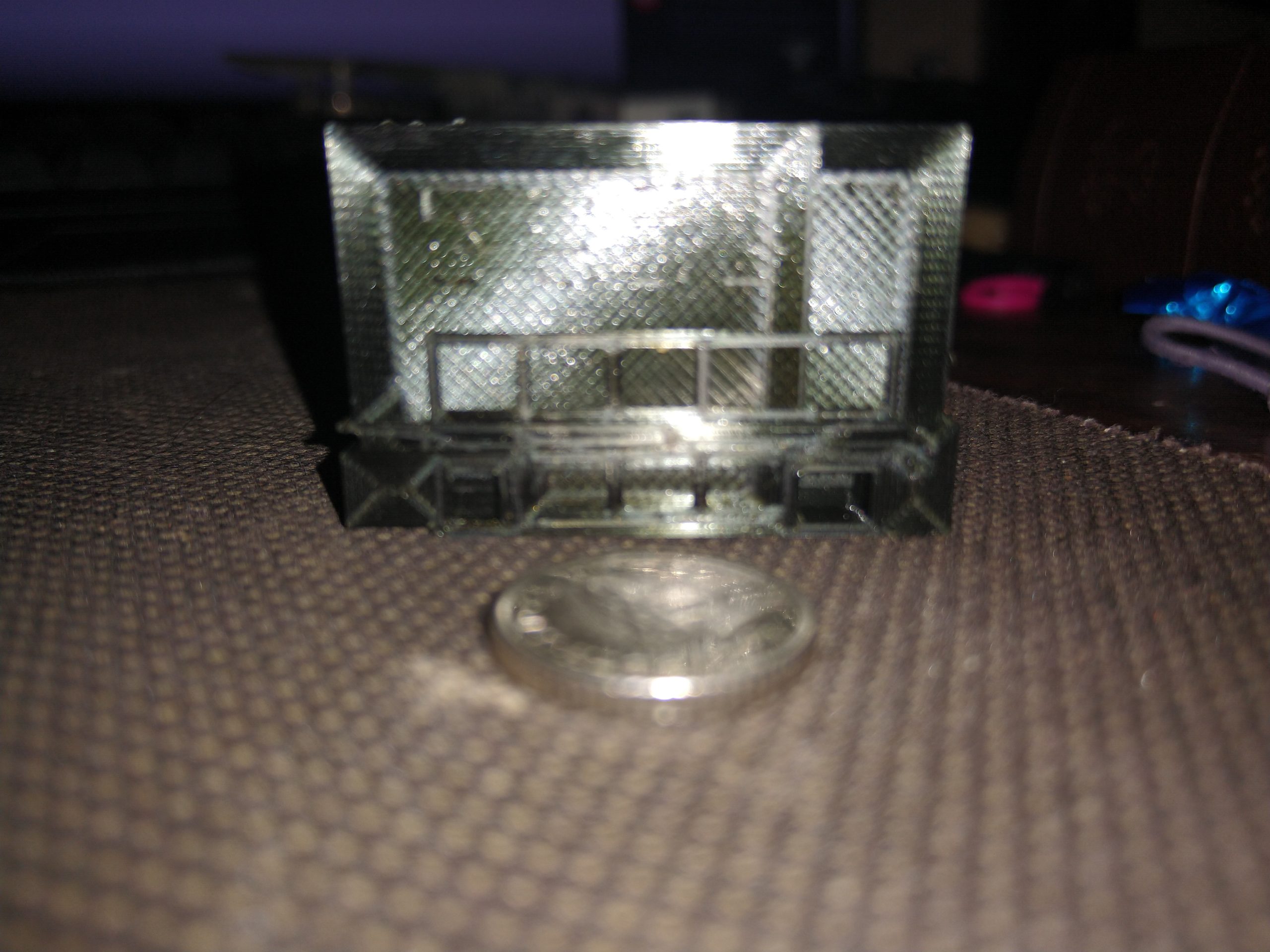 I've tried to adjust it to match, those proportions bend the original model out of shape - so I've tried to lock the scale to preserve it.

There's the solid block roof, and the one with a detachable roof: does that need to be attached to the object so it'll print it?

We’d found that emailing back and forth had become cumbersome and impeded our workflow, we needed something more in sync.

With the roof and the building to be printed as separate objects, they would need to be their own .obj files.
So in the dropbox, I have them saved as dove-and-rainbow-roof-scaled-3 and dove-and-rainbow-roof-scaled-3b (.obj and .mtl).
The .mtl controls the texture co-ordinates and is generally supplied with an obj, though in this case it wouldn’t actually be needed to print.

The Dove and Rainbow were kind enough to mention us on their Facebook page!

I notified squits and it drove us back into action, via our primary form of communication – Reddit Chat:

I received word from evilsquits that the new images were up on the imgur link:

We’d got chatting again and drawn into completing it. I’ll paraphrase:
evilsquits thought they were better but the name still didn’t come out clearly enough: and it’s at an angle. Still no sign.

He had two design tips that we went with:

– if the name was the full width of the building and say double height it would definitely print it
– if you want to make things really easy, chop the whole back and sides off so it's a plaque