Burner Security are a privately owned security company, who specialise in military grade bio-weaponry for the Human Army and the private sector.

Their CEO is the elusive Simon Burner, who has caused controversy with his affiliations with the military, in which he openly discussed supplying The Human Army with genetic-engineered supersoldiers who were only partially human, genetically spliced with animals.
While the animal hybrid soldiers were only designed to be used for combat, there was an oversight in which several batches of the soldiers were accidentally produced fertile; it took Burner Security just over a year to notice, and only came to light when an influx of births were reported all over the world: particularly in or around warzones their soldiers were deployed in.
The outbreak sparked a huge debate on their human rights, one that still goes on to this day. Burner Security , while they have funnelled money towards the families affected by their corporate mistake, they have accepted no real further responsiblities – and pass the buck to their clients,  The Human Army.

Cora Bleach is a known affiliate of Phil O’Tkon – she is fiercely loyal towards him, and is introduced in the story ‘Cora’.

The three buildings are grouped, so form one element entry, and are owned by Burner Security.
Their use is speculated locally, as they are very secretive about what goes on in these buildings – and have earnt them the nickname, ‘The Triad of Evil’.
Although we cannot know for certain, a popular belief is that it is used as a gestation station for clones – and living quarters while they adapt and can be manipulated and brainwashed with Burner Security’s manifesto and turned into killing machines (or tortured and disposed of with nobody knowing).

Access to the building is known to be difficult, and dangerous – it is both patroled and inhabited by Hybrids. 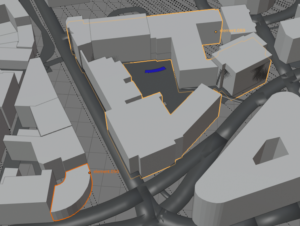 element.# buildings are generic buildings on the sheffield-fps-city-centre.blend map file.
They have not been indexed by name on Openstreetmap, where blender-osm plugin downloaded the map data from.
These buidlings are where the storyline revolves, where I have used full creative licence.

These are screenshots of segments I’d made and uploaded as David Thefan for a 90 minute mix by DJ Stalker, a Darlington DJ.
I was given full creative control over the visual, so I went for it: they quite unsavoury and contain very graphic scenery and hard, fast paced dance music. Headphones and privacy reccommended.
After a hard drive crash, these are all I have of the project: but the storyline continues in Sheffield FPS.
Edit: This link is blocked in the wiki, but you can find it on this article. 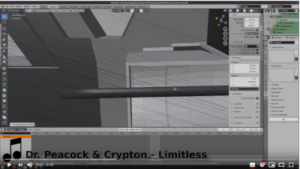 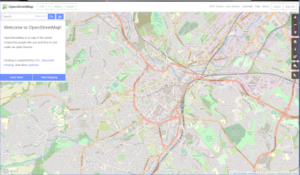 Using the blender-osm addon, I have selected a sizable area, and imported it into Blender – and I’m using it to model the buildings in sheffield-fps-city-centre.blend

Phil is a Time Raider who was teleported out of his own time accidentally, kidnapped by MB Networks, a TV Station and implanted with glasses that allow him to manipulate time. He has a 10 second foresight of what’s going to happen at all times, and can visualise scenarios into his glasses via the cortex connections to his temple to predict the outcome of said event.

Phil is focal in The Burner Effect, and is time-napping Simon Burner out of a vengeance of so far unknown reasons.
During this time-napping, he would leave Simon to live in a parallel time in his own timeline for a year, and bring him gifts from the future. A term they call cat-toying down to the style of the delivery of the ‘gifts’. 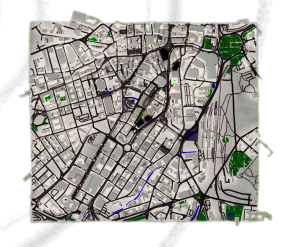 Working project file: contains the map data for the Sheffield FPS levels, and cameras for rendering.
You will need Blender to open this, and it’s recommended that you have the Armory 3D plugin enabled.

Simon Burner is the CEO and founder of Burner Security.

He is wildly known for his difficulty to interview, and unpredictability:
In 2027, he released 32 pages from a book in his possession of unknown origin that detailed circuitry and drawings of technology that has not been invented, supposedly from 2062, claiming that this is what his technology is based on -citing himself as the author. It was shunned as an attempt at a viral marketing hoax, but some scientists are not convinced it is.
Simon refuses to release any more as it is sensitive intellectual copyright, and claims to be a victim of The Burner Effect.

Original Heading when published on Swateam