I’ve taken a little bit of annual leave from the project for a few days – and being quite honest, it could have counted as sick leave too. I’m adapting to some new medication: and while it introduces itself to my body over time, it has had an effect on my habits – and I’ve been in more of an absorbing state of creativity: where I binge watch tutorials, and put my creativity on ‘receive’ rather than ‘transmit’.

See, lately I’ve found a new interest obsession that I’ve just wanted to splurge my education into, 2D animation! I’ve flirted with the idea in my mind for some time it because it’s a great way to tell stories, but never got around to it.
I’m hesitant to say it’s quicker than 3D because this is animation, if you’re doing it right – it’s a slow process no matter what your medium (waiting hours for a couple of seconds of animation to render, or spending hours drawing each frame so that they flow seamlessly from the last frame)

After seeing a video of how far along the Grease Pencil tool in Blender has come, I was blown away, and decided that I needed to learn to master it.

What is Grease Pencil?

Originally, a grease pencil was a wax pencil used for writing on glossy surfaces by traditional animators; and it conjurs to mind somebody sat at a table with a light underneath, sketching on a transparent sheet of cell drawing over the last frame.

In Blender, the grease pencil used to be use for making notes and scribbling around models, and was very limited.
Today, it’s a digital sculpting tool in a 3D software package and it has become so much more, it can (and is being used) to produce 2D animations that are manipulatable in 3D space: and each new version of Blender is bringing to the table phenomenal new features.

So, that’s it for the game?

Not at all!
In fact, I’m looking at ways to incorporate them, the cartoons will give depth to the backstory, in short, animated segments.
The cartoon will take place against the backdrop of the city, though it will look very different – cartoon, comic style.

Here’s a Freestyle render of the three main characters; these are our rogue time-travellers that the story centers around: and are the protagonists in the short story, Cora.

Here they are from a different angle, with a white background, and the versions I drew in front of them. It doesn’t matter that they look like zombies, because I’m only using them as reference for body form and perspective while I draw over them.

I drew over the top of the characters in the exact pose they’re in from the view, and then moved the reference image to the side, so that I can compare side-by-side while I add in the details.

I’ve used some glasses from BlendSwap (u:montedre) for Phil’s future visualisation predicting glasses, and headsup-display.
The original model is a pair of headphones and glasses in one, but I’ve given Cora the headphones. 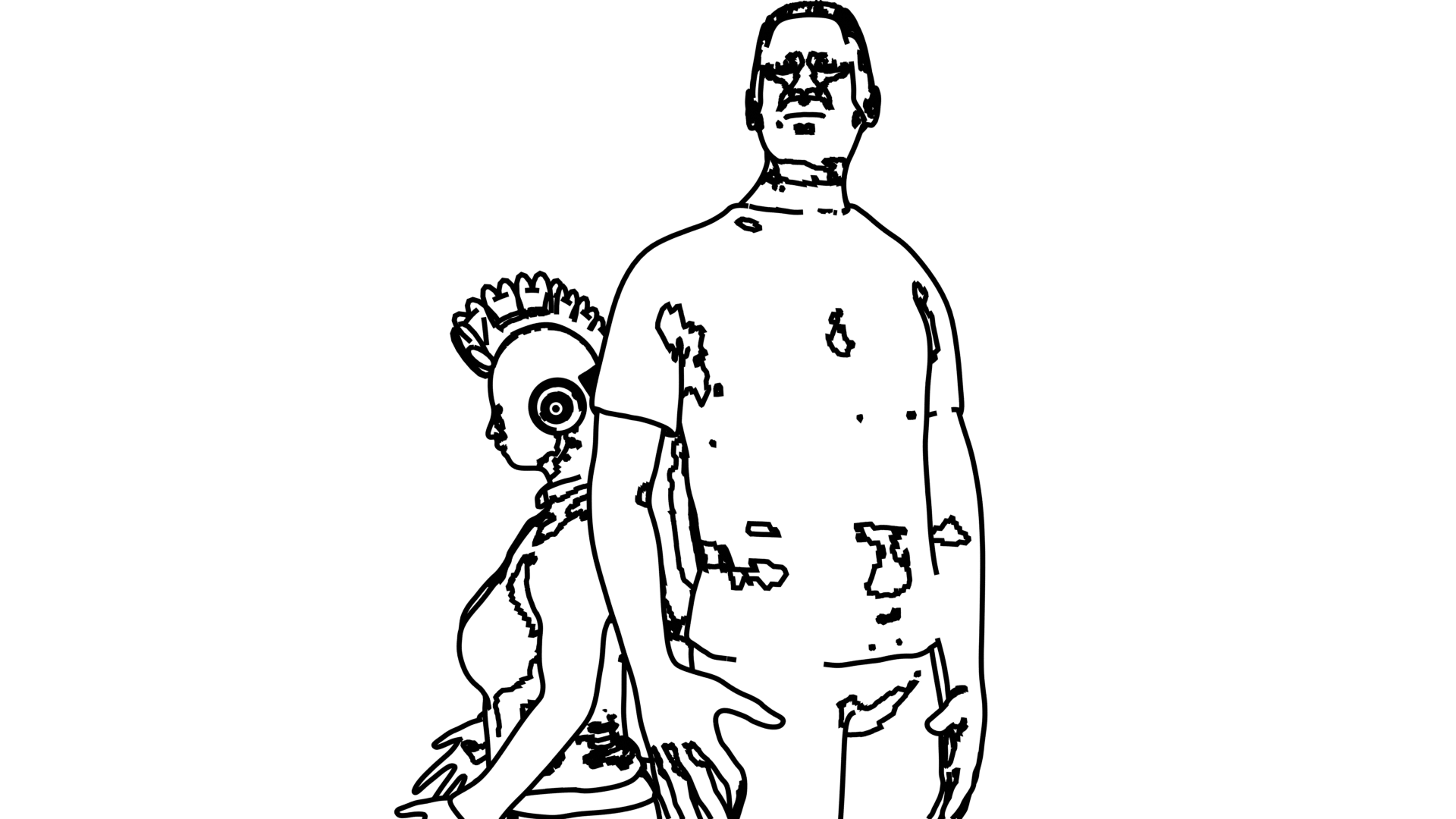 This Freestyle pass collected too much unnecessary contours, so this time I’ve just used one brush to simplify things:

I’ve set a camera to spin around our three characters, and animated them with slightly involuntary movements, so I can get an idea of how they look when they move.

The MakeHuman models in a pose together.
You can see the Freestyle outline around Coras hands specifically.